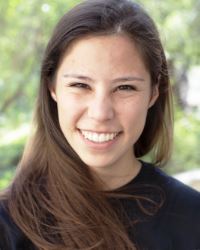 Danielle Rivera graduated from Manzano Day School in 2003. She is currently attending medical school at UNM. As a student at Manzano, she knew she wanted to be a doctor. Working towards that goal, she got her first responder certification and founded a student branch of Operation Smile at Bosque School where she served on a medical mission to Laos as a public health educator. She continued her work for the organization as an International College Council Member while at St. Edward's University, serving on medical missions and administrative trips to China, Panama, Mexico, and Washington D.C. At St. Edwards, she continued her international service with a humanitarian mission to Peru. She also spent a summer teaching in Kibera, a slum in Nairobi, Kenya with Shining Hope for Communities. Danielle was a recipient of the St Edward’s Presidential Award and in addition received a Fulbright Fellowship where she served as a teacher at the National University of Laos. She hopes to continue working to make healthcare more accessible to underserved populations through private practice and public advocacy. 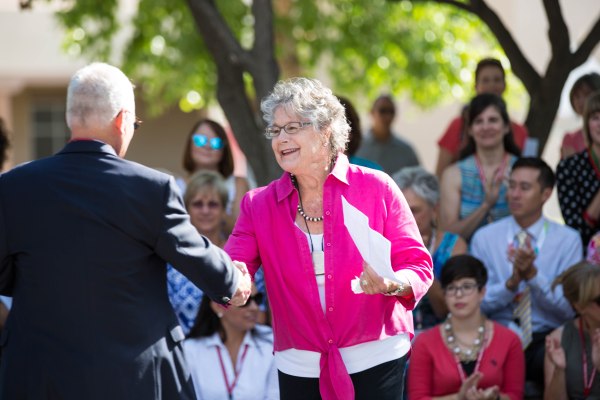 Maggie is a life-long supporter of Manzano Day School, and her many roles include student, aluma, trustee, parent, grandparent, Amigo, and employee (Director of Development for 8 years). As Director of Development, Maggie brought fundraising to new heights, grew the volunteer corps, and especially nurtured the Wings Scholarship Program at Manzano Day School. The Maggie Simms Wings Endowment was created in her name. This scholarship, like Maggie herself, is about helping others less fortunate. Besides supporting every fundraising initiative at Manzano Day School, Maggie also promotes philanthropy in the community. Maggie’s Giving Circle is held at the Albuquerque Community Foundation, and gives grants to local non-profit organizations.

Maggie’s name has been synonymous with class, graciousness and love. It was truly an honor to recognize Maggie for the loyal support she has given to the school and to so many people over the years.

Here is what Maggie had to say upon accepting the award:

There have been three generations of my family who have attended Manzano Day School, and I am sure that the experience has been different for each of us. Nevertheless, we have each loved our time here and have appreciated what Manzano Day School has brought to our lives – a great educational foundation, good friends, service to the school and the community and a love of life-long learning. I hope that each of you will find your own special way to be connected with the school now, and in the future, and that you will find the joy and privilege in helping Manzano Day School move forever forward.

Congratulations, Maggie, and thank you for your loyal support! 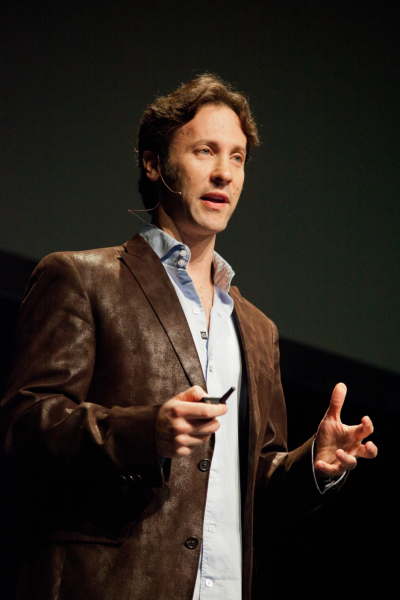 Since graduating from Manzano Day School, David Eagleman has become a neuroscientist, New York Times best selling author. Dr. Eagleman’s areas of research include time perception, vision, synesthesia, and the intersection of neuroscience with the legal system. He directs the Laboratory for Perception and Action, and is the Founder and Director of the Initiative on Neuroscience and Law. Dr. Eagleman has written several neuroscience books, including Incognito: The Secret Lives of the Brain andWednesday is Indigo Blue: Discovering the Brain of Synesthesia. He has also written an internationally bestselling book of literary fiction, Sum, which has been translated into 28 languages and was named a Best Book of the Year by Barnes and Noble, New Scientist, and the Chicago Tribune.

Dr. Eagleman is the author and presenter of “The Brain” (PBS, October 2015), an international 6-hour series that asks what it means to be human from a neuroscientist’s point of view. Dr. Eagleman writes for the Atlantic, New York Times, Discover Magazine, Slate, Wired, and New Scientist, and appears regularly on National Public Radio and BBC to discuss both science and literature. He has been a guest on the Colbert Report and profiled in the New Yorker. 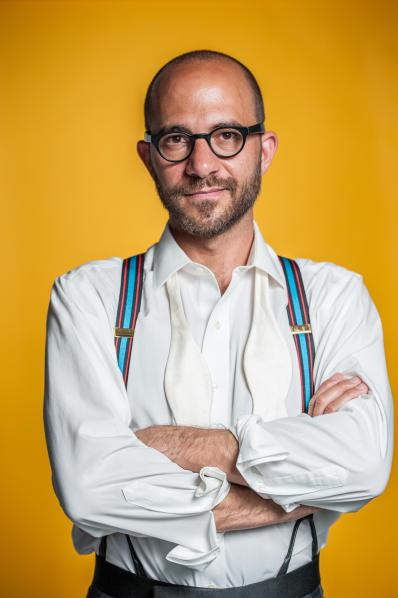 Joshua Smith is considered one of this country’s outstanding flutists. A 1981 graduate of Manzano Day School, Joshua first came to national attention at age 20 when he was appointed principal flute of the Cleveland Orchestra. He was welcomed by the Cleveland press as a “flute phenomenon” and has been praised by the Philadelphia Inquirer for being “undoubtedly one of the most scrupulously artistic and versatile flutists in our midst.” Today he is equally at home as a soloist, chamber musician, educator.

But, what makes Josh stand out is his commitment to community building efforts around the Cleveland area. Wanting to find a way to bring chamber music to the community, Josh and a handful of chamber musicians frequently perform as Ensemble HD in local restaurants, bakeries, pubs, community events and in school classrooms. Moreover, Josh, along with friends and colleagues, has organized bus transportation to concerts and has presented to the National Endowment for the Arts on getting chamber music out of the concert hall and to the world. 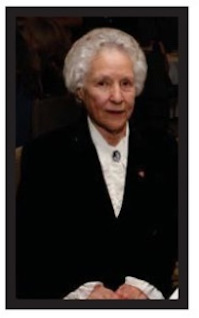 Linda Davis attended Manzano Day School in the 1940s. Linda is the matriarch of the CS Ranch in Cimarron, NM. She has dedicated her life to her family, the CS Ranch, and the livestock industry and remains active in ranch operations in addition to her volunteer commitment to the Cimarron Volunteer Ambulance Service as an EMT. Linda is committed to state and national efforts that foster western heritage. In 1995, she was admitted to the National Cowgirl Hall of Fame. She has also been recognized as the Woman of the Year in Service to Southwest Agriculture.

From the National Cowgirl Hall of Fame Museum – The Women Who Shape the West…Change the World: A fourth-generation rancher, Linda grew up in the drought of the early 1930s on the family ranch in New Mexico, learning ranching up close as a ranch hand. Linda attended Cornell to study agricultural economics, returning home to run the ranch. She married and moved to the CS Ranch which she runs today. Her commitment to ranching and cattle-raising brought her such awards as the Cattleman of the Year Award and the Golden Spur Award. 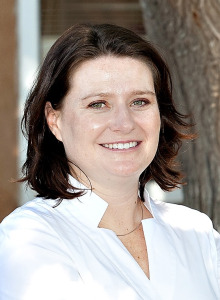 Cynthia Schultz is from the class of 1987. Cynthia is the President at Bradbury Stamm Construction in Albuquerque. She is “a positive example to other women in this industry of what can be achieved”. Cynthia has been honored by numerous awards including New Mexico Business Weekly’s 40 Under 40 (2012) and ENR (Engineering News Record) Southwest’s Top 20 Under 40 (2012)”. Besides being active in the community, she is also a big supporter and current parent at Manzano Day School. 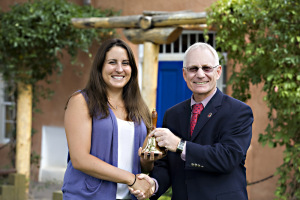 January Romero is from the class of 1995. January is an intern at the Sports Partnership Department of U.S. Fund for UNICEF and is an assistant men’s and women’s golf coach at New York University where she has received her Master of Public Administration from the NYU Robert F. Wagner School of Public service with a focus on public policy and non-profit management. As a Yale undergraduate, she was a four-year member and four-time All-Ivy League honoree. January was also the 2001 New Mexico Girls State Individual Golf Champion while attending Albuquerque Academy. She uses sports/athletes as a platform to raise awareness for children’s issues in addition to creating environments where children have life-enriching experiences that they may not have normally been able to attain given their circumstances (ex: poverty).

January was honored on June 29, 2008 with a proclamation by then Mayor Baca announcing “January Romero Day”. She was also recognized by Fraternal Order of Police & NM Peace Officers Association for “working with under-privileged children and being a role model” (2001) and awarded Hispano Chamber of Commerce Scholarship for success academically (2002). 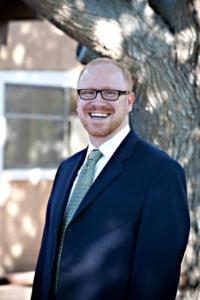 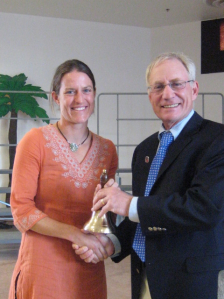 Through her research and her volunteerism, Jennifer is working to make the world a sustainable and quality place. Her current interests center on the creation, implementation, and rigorous evaluation of technologies that impact human health and welfare. Her research programs and projects include: being part of a research team to bring solar irrigation to farmers in rural Africa, participating in The Woods Institute for the Environment’s Freshwater Initiative to develop long-term research programs at Stanford University that help solve the world’s urgent demands for fresh water, and coordinating an Engineers for a Sustainable World team to design a green building in Nicaragua. In addition to her busy career, Jennifer finds time to volunteer for various humanitarian efforts. 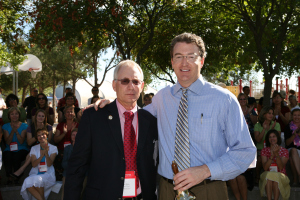 Stephen Black is from the class of 1980. Stephen studied American history at The University of Pennsylvania, where he completed his bachelor’s degree magna cum laude in 1993, before attending Yale Law School where he graduated in 1997. Following law school, Stephen moved to Birmingham to become involved in public affairs and to practice law at the firm Maynard, Cooper and Gale. After three years in private practice, he spent a year serving as an assistant to the Governor, where he researched policy issues and worked on economic development projects. After leaving the Governor’s office in 2001, he returned to Maynard, Cooper and Gale and began his campaign for Alabama State Treasurer.

After coming up 3% short of victory in the 2002 general election, Stephen returned to practice law. In 2004, he created Impact: An Alabama Student Service Initiative – the state’s first nonprofit organization dedicated to developing and implementing substantive service-learning projects in coordination with universities and junior colleges throughout the state.

In June 2005, Stephen was appointed to the UA faculty as a Senior Lecturer in Communicative Ethics and asked to create and then direct a new Center for Ethics and Social Responsibility.

Joshua Cooper Ramo is from the class of 1981. He is Managing Director at Kissinger Associates, one of the world’s leading strategic advisory firms. He previously worked for the John Thornton Group at Goldman Sachs handling the advisory and banking business with a particular focus on China. This gave him extensive experience working closely with Chinese officials on all levels. The World Economic Forum has called him “one of China’s leading foreign born scholars.”

Prior to entering the advisory business, Joshua was a journalist, working as the youngest Senior Editor and Foreign Editor in the history of Time Magazine. He is a member of the Council on Foreign Relations and of the World Economic Forum’s Young Global Leaders, and is an advisory board member of the Leaders Project and co-founder of the US-China Young Leaders Forum. During a 2001 sabbatical, he worked in South African AIDS hospices. Joshua also holds two U.S. national point-to-point air speed records and is an avid aerobatics pilot, about which he wrote the book No Visible Horizon. Joshua has received numerous accolades and honors throughout his career.

Joshua graduated from the University of Chicago in 1992 with a degree in Latin American Studies and holds a Masters in economics from NYU. 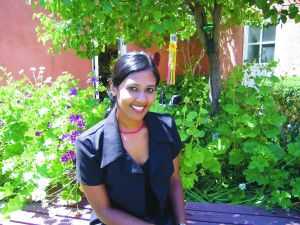 Shilpa Reddy is from the class of 1991. She is a physician at Albuquerque Dermatology Associates and Cutaneous Surgery Center (ADA/CSC). Shilpa completed her undergraduate studies at Washington University in St. Louis receiving a degree in Biology and graduating with honors. Her accomplishments in undergraduate education include Phi Beta Kappa Honor Society membership, National Intercollegiate Tennis Association Scholar Athlete All-American, and the Gwendolyn Drew Award for Superior Academic Standing and Positive contribution to Athletics. Shilpa continued her education at the University of New Mexico School of Medicine, where she graduated first in her medical school class. She received the La Tierra Sagrada Society Grant Award for Medical Student Research, The University of New Mexico School of Medicine Faculty Excellence Award, and was inducted into the Alpha Omega Alpha National Medical Honor Society. After completing an internship in Internal Medicine, Shilpa completed a Dermatology residency at the University of New Mexico. During that time, Shilpa co-authored published articles in medical journals and presented materials at the New Mexico State Dermatology Society and American Academy of Dermatology annual meetings.